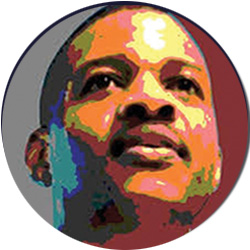 Guy GWETH is the Director of the Field Offices of the Federation of German SMEs (BVMW) in Benin, Cameroon, Gabon and Togo. He is the founder and Chief Operating Officer of Knowdys Consulting Group (KCG), a business intelligence, due diligence and public affairs consultancy in Africa. He isalso President of the African Centre for Competitive Intelligence (ACCI). He heads the “Doing Business in Africa” programme at Centrale Supelec (former Ecole Centrale de Paris) since 2012, and the MBA “Economic Intelligence and African Markets” at the Ecole Supérieure de Gestion (MBA ESG) in Paris since 2018.

He is a graduate of the School of Economic Warfare (EGE) of Paris, the Center for Diplomatic and Strategic Studies (CEDS) of Paris, the International Institute of Communication of Paris (IICP) and the Faculty of Law and Political Sciences (FSJP) of the University of Yaoundé II. He is part of the Simone Veil Promotion of the Executive Doctorate in Public Affairs (EDPA) of the University of Paris Dauphine.

Is (or has been) a lecturer specialized in African geostrategy, strategic intelligence and due diligence at the Institute of Advanced Studies in National Defense (IHEDN) in Paris, the EGE, ESG Paris, the BGFI Business School of Libreville and the University of Reims Champagne Ardenne.

He is regularly interviewed by international news channels such as RFI, France 24, Deutsche Welle, Les Afriques, Forbes Afrique, Financial Afrik, La Tribune Afrique or Maroc Diplomatique, etc., and has been a guest speaker for A-speakers and Glamspeak since 2016. Guy GWETH was ranked by the Financial Afrik Awards 2021 among the “100 who are transforming Africa”.