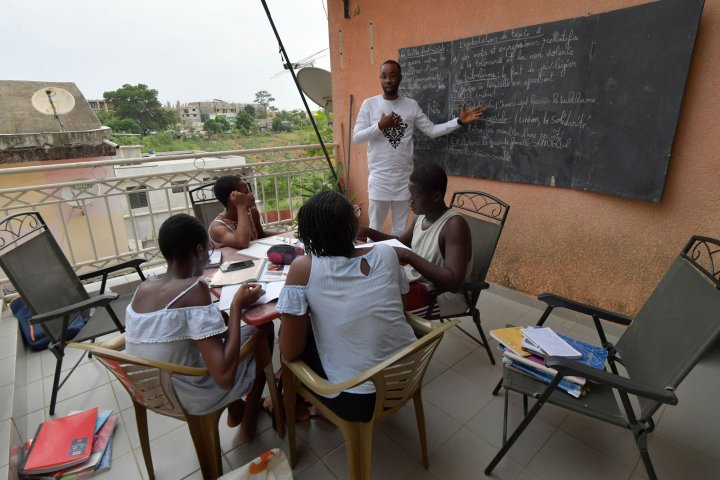 [CAVIE-ACCI] The COVID-19 pandemic has caused seismic disruptions to the higher education sector, but has also offered significant lessons on the importance of self-reliance on the part of African countries when it comes to dealing with societal challenges, as well as greater collaboration with African partners, according to University of Botswana Vice-Chancellor Professor David Norris.

Wrapping up his input into last week’s online debate on “COVID-19 Pandemic: Responses and lessons learnt from African universities” hosted by the Alliance for African Partnership (AAP), Norris said the pandemic had opened the eyes of higher education leaders to the fact that universities belong at the centre of development and at the forefront of the search for solutions to societal challenges. “Working closely with ministries, with governments and with industry is critical … it has to be a norm for us. What is also very important, which is a good lesson, is that self-reliance is very important for African countries. We cannot be relying on people or on other nations to find solutions for us, to come to our aid. We must find solutions for ourselves. We must be self-reliant in many areas, in many, many areas,” he said.

In a follow-up exchange with University World News, Norris said he believes continued heavy reliance on the West has stifled African development. “Increased productivity coupled with African economies being involved in whole value chains is critical for self-reliance. Regional integration and intra-Africa trade are also of paramount importance,” he said. “With respect to COVID, it is highly evident that countries have been looking ‘inwardly’ to mitigate the effects of the pandemic. Western countries (which Africa is so dependent upon) are thinking of how they can help themselves – few, if any, are thinking of how to help Africa. The biggest lesson Africa should learn from this pandemic is that they should rely upon themselves for survival. As an example, should a vaccine for controlling the virus be found, Africa will only receive it years later when the West has taken care of its citizens.”

Norris said while other Western countries may not be so bold as United States President Donald Trump when he talks of “America First”, it was likely they were thinking like him. “African leaders should not ‘bash’ Trump for saying this; they must rise and revive their economies and be self-reliant,” he said.

Acknowledging the work of the AAP during last week’s webinar, Norris encouraged his colleagues in African universities to start collaborating more seriously with African counterparts as opposed to partners in the Global North. “We need to have collaboration between ourselves and Africans and I’m so glad the AAP is promoting it,” he said. Norris said universities should also be promoting themselves to students in Africa and the rest of the world. He said before the lockdowns began, he had embarked upon a search for international students keen to study in Botswana. “It is important that our students do not think of rushing outside of Africa to study. It starts with us, with us collaborating,” he said.

Expanding later on his comments made during the webinar, Norris said he was convinced that the coronavirus epidemic would sensitise African universities to move closer to each other. “Let me be clear: I’m not against forging collaboration with universities in the North. I’m fully supportive of it. I’m saying universities in Africa must equally (or even more) forge partnerships and collaborations amongst themselves. Internationalization through global collaboration and partnerships is critical for relevance and innovation (which Africa critically needs).”

Through internationalization, African universities can attract research funding and enhance their brand, both in terms of research and teaching excellence, he said. However, closer collaboration amongst universities on the continent is equally important because they share common developmental challenges, and their relatively limited resources meant research was unlikely to be duplicated and research funds were unlikely to be thinly spread leading to less effective research outcomes. In addition, he said, regional research with relevance to Africa may potentially encourage African governments to commit more resources to research.

Sharing his own institution’s experience of the lockdown, which took effect on 1 April in Botswana, Norris told webinar participants that international students who were unable to return home are still being accommodated on the University of Botswana campus. He said being a largely contact university (as are most universities in Botswana) the university has faced challenges, like most of its counterparts, with the switch to online learning. “We do have capabilities for going online but … there is quite an array of challenges including connectivity, [particularly in] rural areas, and the fact that there are also issues of inequality among students.”

He said a university task team was currently meeting to plan “what the university could be doing in terms of developing different approaches to teaching”. The university’s management team, he said, had decided that academic programmes should recommence by mid-May. “Now if we are going to do so, what do we need to have in place, what arrangements do we have to have in place, what plans? And as I indicated, what is the form of teaching and learning that will take place?”

Norris said provision of clinical care was a key component of the university’s response to the COVID-19 outbreak in Botswana. “We have a faculty of medicine which has resident skills, we have specialist nurses, we have pharmacists, we have critical care specialists, [and] we have emergency physicians. All of these professionals are actively, as we speak, in the teaching hospital taking care of patients. “We also have some of our medical staff … spread all over the country in a number of referral hospitals in Botswana.”

Norris said the university’s various departments, including pharmacy, had produced hand sanitiser and protective face shields on a mass scale, some of which had been donated to the country’s hospitals. The university was also prototyping a ventilator as part of a collaboration between the University of Botswana, the Botswana International University of Science and Technology, an innovation centre and industry partners. Scientists from the biological sciences, chemistry and health sciences were also exploring possible medicines from indigenous plants that had been traditionally used to aid breathing.

The university was also collaborating with national partners and the national health laboratory to increase the country’s capacity for COVID-19 testing. “The goal is to have 3,000 tests per day,” he said. In addition to providing advisory services to government in areas of economics, Norris said the university had, working with the Ministry of Health, produced a dashboard to monitor the pandemic as well as free computer software tools for the management and monitoring of COVID-19.

The Editorial Staff (with UWN and HMB)