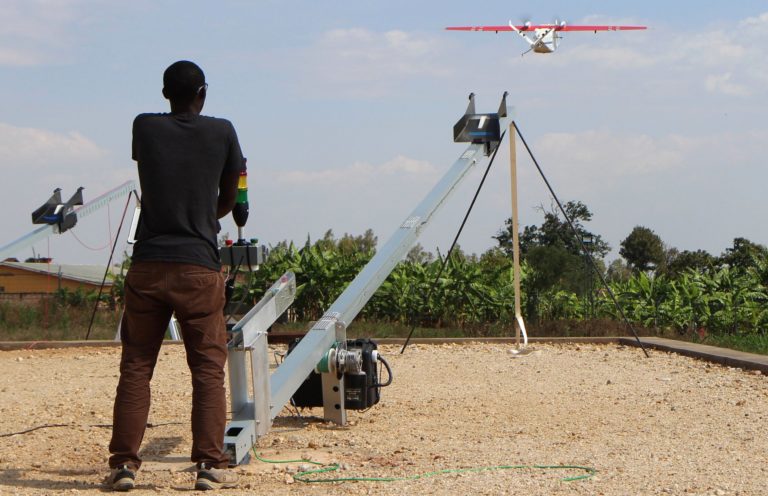 [ACCI-CAVIE] A drone made in Rwanda by CHARIS Unmanned Aerial Solutions Company but this is purposely meant for filming and aerial photography. The Ministry of Information Communication, Technology and Innovation MINICT) says the establishment of a drone academy worth about Rwf 6 Billion ‘soon’ will answer a challenge of having few drone experts in the country by training experts locally.

Paula Ingabire, Minister of MINICT said Rwanda, like other countries, has few skilled citizens who can use drones to solve social and economic challenges across the country, one of the reasons why the government is planning to invest heavily in the forthcoming academy.

“The plan is training as many people as possible in using drones in several sectors including Health, agriculture and others. So far, people who are skilled are few, not in Rwanda only but also in other countries that have been using drones for a long time,” Ingabire said.

“We need many local experts that can manufacture, repair and use drones. These are challenges the academy will solve, we have finished the study for its establishment. Currently, we are looking for partners and in the near future, the construction will start.”

Without mentioning the number of drone experts in the country, Ingabire said that the numbers are significantly low. She made the observation during the unmanned Aircraft Systems (UAS) annual retreat conference held on 15th to 17th September in Kigali city. Supported by the Rwanda Civil Aviation Authority (RCAA) drone annual retreat aims at bringing together stakeholders at the aviation sector including regulators, academia and private sector to discuss policies, educating people, financing, manufacturing and insurances.

“The challenge we had is lack of regulations for the drones because the technology was new, so far that has been settled with aviation authorities and stakeholders. This industry is still evolving. So, there are so many changes taking place, it necessitates continued review and that is a strategy that we have now,” Andrew Mutabaruka, a Senior air traffic controller at Rwanda civil aviation authority said.

“Now, we have the drone academy coming to cement the capacity building in the country, which is so beneficial. The academy is very essential and timely.”

He said that the authorization to fly drones is not intentionally delayed by the aviation authority, but all the concerned authorities must work accessibly and in a coordinated manner to clear individuals who request for allowances fast. Speaking about individual free flying of drones, Minister Ingabire pointed out that individuals who want to fly them are asked to apply before, purposely for security reasons. Since last year, several stakeholders committed the manufacturing of drones including University of Rwanda, Leap Applied Research (LEAPR) Labs and Zipline but, firstly all the companies are focusing on training experts

Reportedly because the technology is still new in the country.

In February 2020, the World Bank offered the University of Rwanda College of science and technology a deal to develop a drone port estimated to cost $2million in Karongi town – Western Province.

“We incubate young people and enable them to turn projects into products, since 2017, there is development going on in the country, over 150 trainees have been hired by various drone companies and robotic companies,” Tuyihimbaze Serge, CEO of LEAPR Labs company said.

He added that his company trains students in drone maintenance, designing, manufacturing, among others.