Mali, one African war France could not avoid: Reuters’ analysis 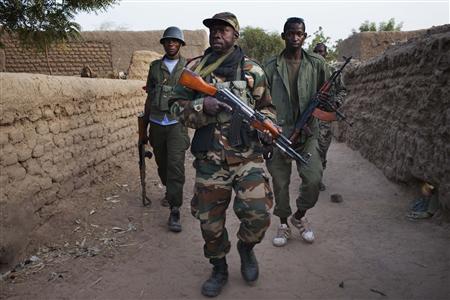 [CAVIE-ACCI] Just as its leaders were defining a new “hands-off” strategy for Africa, France has been thrust onto the front line of one of the continent’s riskiest battlefields deep in the desert of Mali.

It could also trigger an attack on French soil. But, in what could be the biggest foreign policy decision of his presidency, Hollande bet that inaction bore a greater peril of producing a jihadist state like Afghanistan under the Taliban.

“We must stop the rebels’ offensive, otherwise the whole of Mali will fall into their hands – creating a threat for Africa and even for Europe,” his foreign minister Laurent Fabius told reporters to justify backing Mali’s dilapidated national army.

For months, military planners in Paris had been working on discreet and limited support for an African-led effort due later this year to try and drive Islamists out of France’s ex-colony.

That scenario was swiftly overtaken on Thursday as rebels captured the central town of Konna that is a gateway towards Bamako 600 km (375 miles) further south.

With Mali’s army impotent, Hollande ordered the first military strikes of his career. Now France has deployed troops, C-160 transport aircraft, attack helicopters and has Rafale jets on standby the question is: where does it go from here?

HOLLANDE HAS WIDE BACKING – FOR NOW

The intervention came weeks after Paris conspicuously failed to rescue the incumbent leader in Central African Republic, another ex-colony, leaving President Francois Bozize no alternative but to accept a power-sharing pact with insurgents threatening to take over his mineral-rich state.

The Bozize snub was a sign that Hollande’s government was banging another nail in the coffin of “Francafrique”, the shady decades-old system under which Paris propped up African leaders aligned to French business interests.

Hollande’s government stresses that by entering Mali, France is not falling back into old habits.

Its presence is legitimised by U.N. resolutions mandating foreign intervention to support Mali forces and approval by the same African leaders irked in 2011 when France and Britain ordered NATO air strikes in Libya to oust Muammar Gaddafi.

The United States and Britain have also signalled backing, and even opposition French conservatives mostly say Hollande did the right thing. Shocking reports of public amputations in rebel-held northern Mali as tough shariah Islamic law is imposed will persuade many French voters the intervention was just.

But events on the ground could change that quickly.

While the Mali Islamists are a rag-tag army, they managed to recoup many of the arms that spilled out of Libya during its war and can inflict real damage including the downing of a French helicopter on the first day of strikes.

By going to help the Malian army, Hollande defied threats by the rebels’ allies, al Qaeda in the Islamic Maghreb (AQIM), to kill the French hostages taken across the Sahara in past years.

As the failure of a French commando bid late last week to free a secret agent held in Somalia since 2009 shows, it will be very hard for him now to guarantee their safety.

“With this (Mali) intervention, the French president has shown he did not want to be taken hostage himself by the issue of the French hostages held by AQIM. That is an act of political courage,” said Mathieu Pellerin, head of the Paris-based Centre of Strategic Intelligence on the African Continent (CISCA).

Hollande said he believed the secret agent had been killed during the abortive raid, an assertion which the Somalian al Shabaab insurgents deny.

With some of the rebel Malian fighters living side by side with their families, the further risk is of collateral damage that would drain domestic and foreign support for the action.

“If we jump in then we could have horrific images of children, women killed,” said one French diplomatic source speaking before last week’s events, noting how civilian deaths caused by NATO operations in Afghanistan damaged public support for the Western mission to dislodge Taliban Islamists there.

Fears will also grow of reprisals on the large expatriate French communities in neighbouring Muslim countries such as Burkina Faso, Niger and Senegal.

“There are consequences, not only for French hostages, but also for all French citizens wherever they find themselves in the Muslim world,” Sanda Ould Boumama, of the Malian insurgent group Ansar Dine, warned on Saturday.

But the real political game-changer for Hollande is the threat of an attack on French soil.

France is no stranger to such strikes, with eight killed during a wave of bombings of the Paris Metro in 1995 by Algeria’s Armed Islamic Group (GIA), a guerrilla Islamist movement from which AQIM traces some of its lineage.

Home to Europe’s largest Muslim population of some five million, France is acutely aware of the risk of radicalisation after an al Qaeda-inspired gunman last March went on a killing spree in the southern city of Toulouse, killing seven.

Underlining that he takes the threat of attack seriously, Hollande on Saturday announced he was stepping up security measures on French transport and in public places.

For now, France said its aim is not to begin an operation to take Mali’s north back out of rebel hands. Hollande has stressed its exclusive goal is to prepare for a subsequent intervention to be led not by Paris but by the West African ECOWAS bloc.

Mark Schroeder, Africa-watcher for U.S.-based risk and security consultancy Stratfor, expected French troops to focus on holding the line in central Mali in coming weeks and wait for the operation to take on a more international feel.

“Behind that line, the European Union military training mission will come in and African forces will start to arrive,” he said of troops from neighbours including Niger due to arrive from Monday to build a total force around 3,300 strong.

While that could help France wind down its exposure, CISCA’s Pellerin said that would still depend crucially on the African-led coalition gaining the necessary size and strength to lead the fight to push back the rebels – not a given at this stage.

A rare dissenting voice, former foreign minister Dominique de Villepin – who led world opposition to the U.S.-led Iraq war in 2003 – warned France could get sucked into a conflict where military victory was hollow without political conciliation.

“It is time to break with a decade of lost wars,” he said of wars in Iraq, Afghanistan and Libya which he argued merely created the grounds for future conflicts.

For Hollande, whose poll ratings are at record lows because of his hesitant leadership and failure to cut unemployment, Mali could emerge as his political crucible.

It was already diverting attention away from a mass march on Sunday in protest at his plans to legalise gay marriages, and meant that a late-night Friday deal between trade unions and employers on reforming the labour market went little noticed.

“This is not just any old baptism of fire,” said Bruno Tertrais, head of research at Paris’s Foundation for Strategic Research. “This is a baptism of fire in his very role as chief of the armed forces.”