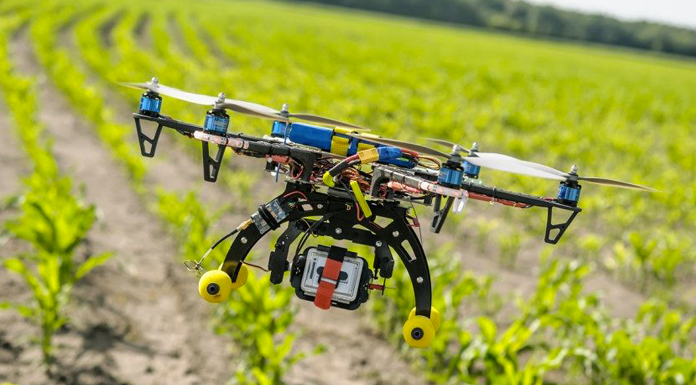 [CAVIE/ACCI] Can drones save sub-Saharan Africa from starvation? That’s the question being asked by scientists, engineers, climatologists and politicians as climate change radically alters weather patterns and temperatures on the African continent, posing new challenges to a sector that is being asked to feed a rapidly growing population while simultaneously adapting to more difficult conditions.

To meet the challenge, farmers are turning to precision agriculture and cutting-edge technology that is being pioneered in both developed and developing economies to maximize yields and minimize environmental impact. Much of this emerging technology focuses on the use of drones to help build sustainable farming.

Indeed, a recent report from the African Union on transforming African agriculture entitled Drones on the horizon: Transforming Africa’s Agriculture focused almost exclusively on the use of drones. The potential benefits of drones and other technology-based tools are considerable, but the regulatory frameworks are not yet in place to facilitate their widespread use for the benefit of hungry populations.

This is a long-running and urgent problem. Africa’s farming sector, which, according to the African Union report, “accounts for more than 30% of the continent’s gross domestic product and employs more than 60% of its working population,” is already struggling with the impact of deforestation, water scarcity and severe weather changes brought on by climate change.

Outdated tools such as hoes and cutlasses and ancient agricultural practices such as planting according to phases of the moon are further holding back productivity while 60 million children remain undernourished. Most African farms are also in areas with limited Internet connectivity, making full use of technology a major challenge.

The UN’s Food and Agriculture Organization projects that the global population will reach 9.1 billion by 2050. Feeding that many people is going to require that global food production grow by 70%. In Africa, which these estimates project will be home to about two billion people in three decades’ time, agricultural productivity will need to accelerate at an even faster rate to avoid food shortages.

Clearly, systematic reform and technological progress is needed to unlock Africa’s agriculture potential and produce enough food to feed the continent’s population. More advanced farming techniques and technologies such as satellite positioning data, remote sensing and proximal data gathering can help to significantly reduce environmental impacts and boost the agriculture sector. This is critically important because Africa will suffer some of the worst effects of future climate change if greenhouse gas emissions continue at their current pace.

Yet uptake of new technologies, especially drones and unmanned aerial vehicles (UAVs), has been slow throughout the continent. According to the Drone Regulation Database, only 26% of African countries currently have regulations pertaining to drones. While drones are used sporadically to support small-scale farmers in Mozambique and Tanzania, as well as agribusinesses in Morocco, the majority of drones deployed in Africa are used for wildlife monitoring.

Observers suggest that increasing regulations pertaining to drones and UAVs is key to advancing Africa’s agriculture sector. In June, the European Union moved to harmonize drone regulations across all member states, and the African Union would be well advised to do the same. Harmonized regulations would help increase the use of drones where needed most.

And there is substantial evidence that drones can make a positive difference for African farmers. In Uganda, for example, a collective of some 7,000 smallholder farmers are using drones to map the location, size and productivity of their farms. This allows farmers to quickly spot problem areas and target them with the right amount of fertilizer or pesticides. Drones also provide farmers with real-time information about their land, crops and livestock that is not detectable on the ground.

Yet African nations have a long road ahead if they are to benefit from drones. Compounding current problems, many of the drone regulations currently in place in Africa are restrictive rather than enabling. They ban civilian use of drones and lack certification standards.

With climate change worsening worldwide and, in particular, on the African continent, the time to act is now. By 2030, 90 per cent of the world’s major crops, including maize, rice and wheat, will experience reduced or stagnant growth rates. Widespread use of drones, satellite services, apps and open data could help farming communities in developing countries execute tasks with better precision and increase their productivity.

Improving access to new technologies and drones will be vitally important. Public-private partnerships should be strengthened and the expertise of international drone manufacturers should be leveraged. Governments can address prohibitive costs and technical barriers through licensing, registration, subsidies and cooperatives.

African governments also need to pursue collaborations with international institutions. For example, the Prairie Farm Rehabilitation Administration has shown interest in working with African governments. The organization has expertise in managing drought and land degradation, and could be a beneficial resource. Established institutions in Africa such as the Water Research Commission and the Agricultural Research Council should be strengthened and greater knowledge sharing should be encouraged.

Investing now in the right innovations and technologies, notably drones and UAVs, will strengthen the resilience of Africa’s farmers and help the continent stave off mass starvation.