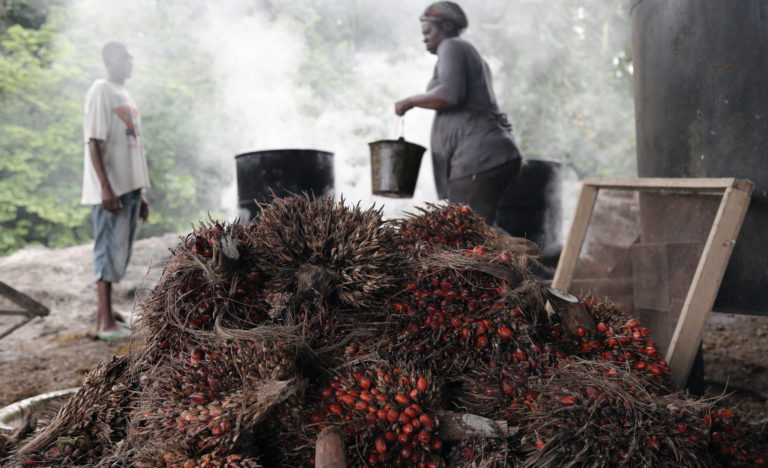 [CAVIE-ACCI] Well-known investment funds in the U.S., Europe and South Africa are financing a set of oil palm plantations that have been at the center of more than a century of discord in the northeastern quadrant of the Democratic Republic of Congo (DRC), according to a new report from the Oakland Institute, a California-based policy think tank.

People from communities around the Boteka, Lokutu and Yaligimba plantations managed by Plantations et Huileries du Congo (PHC) say that their ancestors’ land was stolen from them for a massive palm oil-producing plantation when Belgian colonial officials were in control.

The oil palm concessions cover more than 107,000 hectares (264,000 acres) in three separate locations in DRC. Today, residents say their rights to the land and their livelihoods continue to be sidelined in favor of profits sought by the company and outside investors. The Oakland Institute and other organizations say workers on the plantations are paid little for arduous and dangerous work, including exposure to pesticides used to keep the rows of palms producing their oil-bearing fruit. They have also raised concerns about the nutrient-rich runoff from the plantations that enters local tributaries of the Congo River.

Despite the publicity around these issues, several major foundations, endowments and pension funds based in the United States, the United Kingdom and South Africa have continued to invest in funds that support PHC’s operations. In the past decade, European development banks have also funneled tens of millions of dollars into the plantations.

“While several of the investors claim to promote socially conscious and environmentally sustainable investments, they have turned a blind eye to the legacy of abuses in the PHC concessions,” Andy Currier, the report’s author, said in a statement. Currier added that complicated ownership structures allow these funds to “maintain distance from the extensive history of documented abuses against the local communities, while seeking a profitable return on their investment.”

The most recently documented of those abuses came in mid-February 2021, when a resident of a community near the Lokutu plantation named Blaise Mokwe was arrested. He was accused of having stolen oil palm fruit from the plantations and arrested by PHC-contracted security guards. While Mokwe was in custody, he was beaten, and days later, he died.

“The Company is cooperating fully with the police and other authorities in Lokutu as they investigate the circumstances surrounding Mr. Mokwe’s death, and allegations that it was the result of injuries caused by staff working for a security subcontractor to PHC,” it said in a statement. “The Company has suspended those alleged to be involved in this incident with immediate effect, pending the results of the investigation.”

But the Oakland Institute and the organizations it partners with in DRC say Mokwe’s violent death is but a part of a violent legacy that has continued irrespective of who is in charge. In addition to the exposure to the chemicals necessary for industrial agriculture, community members are not able to access even the forested parts of the concessions that could provide sources of food or medicine, the groups say.

Now, they have unearthed evidence that a number of well-known investment groups are financing these operations. The report asserts that the Bill & Melinda Gates Foundation Trust, the Royal County of Berkshire Pension Scheme, the South African Government Employees Pension Fund and Public Investment Corporation, and the University of Michigan Endowment are all “major investors” in funds run by a private equity outfit called Kuramo Capital Management. Kuramo is based in the U.S. but focuses on investments in Africa, and, as of 2020, is a majority owner of PHC.

In an email, a spokesperson for the Royal County of Berkshire Pension Fund told Mongabay that it “has no exposure to” Straight KKM, the company that currently owns PHC, nor has it ever invested in the company. According to a 2016 report, however, the pension fund invested £10 million ($13.9 million) in the Kuramo Africa private equity fund, which is owned by Kuramo Capital, in 2012. Kuramo Africa in turn is involved in the ownership structure of Straight KKM, according to the Oakland Institute’s research.

Anuradha Mittal, the Oakland Institute’s founder and director, said it wasn’t clear what due diligence these trusts, endowments and pension funds undertook, if any, before committing their money into Kuramo’s funds.

“I’m sure when they’re buying up offices in Seattle, they do all kinds of history, making sure of titling and all of that, right?” Mittal told Mongabay. “What kind of work is done when you go to DRC?”

In July 2020, Kuramo and Mauritius-based Mafuta Investment Holding Limited bought PHC from Toronto-based Feronia Inc. through a company known as Straight KKM for $500,000 plus an agreement to assume Feronia’s outstanding debts. Feronia owned PHC at the time and was in the midst of filing for bankruptcy. Kuramo now holds an 85% stake in Straight KKM, which in turn owns 76% of PHC. The Congolese government owns the remaining 24%.

The University of Michigan and the Bill & Melinda Gates Foundation said they do not comment on their respective individual investments and holdings. No other financial organizations responded to Mongabay’s requests for comment.

PHC said in a statement shared with Mongabay that the plantations provide jobs where few exist and that “PHC has an overwhelmingly positive impact on the lives of its employees, their families, surrounding communities and the Democratic Republic of the Congo.”

PHC also said it has funded more than $10 million of community health care, water and education projects in recent years. The company also has a new environmental and social action plan that it said would boost environmental standards along with working conditions and pay with support from development banks invested in the project.

“Whilst PHC does not claim that things are perfect, and recognises that a great deal of work is yet to be done, it feels it is deeply regrettable that there are those who, for whatever motives, seem determined to undermine the positive progress being made by the Company through the perpetuation of misleading, exaggerated, and/or factually inaccurate information and allegations,” the company’s statement said. “The Company also does not believe that the views held by a small minority are representative of those held by the vast majority of employees and local communities living in and around its operations, who see PHC’s presence and ongoing survival as both positive and of vital importance.”

Kuramo highlights its position as an Africa-focused investor as well as the roots of many of its principals. Walé Adeosun, Kuramo’s founder and chief investment officer, noted that connection in a statement released in July 2020.

“[Straight] KKM brings together a group of African investment professionals with deep roots in their communities in Africa,” Adeosun said in the statement. “We were born and raised in Africa and many of us still live in Africa. As such, ensuring that all our investments achieve success in a responsible manner is very important to us; PHC is no exception.”

Frédéric Mousseau, the Oakland Institute’s policy director, said that link isn’t an indicator that their investments will help with community development.

“The fact that it is run by a few African individuals doesn’t mean they’re going to do any better,” Mousseau said. Kuramo’s website indicates that it invests largely in parts of sub-Saharan Africa that are growing economically, with a focus on the expanding power sector and debt markets on the continent.

According to activists and civil society organizations in the Boteka, Lokutu and Yaligimba communities, the problems with the plantations stretch back to 1911. At the time, a Briton named Lord Leverhulme acquired the land from authorities in the Belgian Congo. Not only were the communities not consulted about the forested land on which the plantations were established, the people in the area were pressed into working for PHC, their descendants say.

Thanks to these colonial advantages, the plantations were initially highly profitable and ultimately helped spur the creation of Unilever, today one of the world’s largest consumer goods companies.

The country known as DRC today gained its independence from Belgium in 1960. At the time, it was known as the Republic of Congo (the name today of the country that sits across the Congo River and has its capital in Brazzaville) and later as Zaïre. In the 1960s, the country that’s home to 60% of the Congo rainforest became the world’s second-largest producer of palm oil, thanks to massive plantations such as PHC’s.

But that success didn’t last, and by 2009, Unilever had shed its PHC holdings, with Feronia Inc. taking control. But Feronia had no experience as a palm oil producer. Beset with labor issues and a global palm oil price that, until recently, had stagnated, the company struggled to turn a profit.

According to a recent report by the Congolese NGO RIAO-RDC, the Barcelona-based NGO GRAIN and several other international organizations, a coterie of European development banks provided $150 million in loans and equity investments to investors with interests in PHC. These funds flowed despite an ongoing movement for the communities to be given control of the land their ancestors lived on and ensuing violent clashes between police and Feronia-backed security forces and community demonstrators.

Gilbert Lokombu Limela, a resident and member of the Civil Society of Basoko in Lokutu, told farmlandgrab.org that people protesting the continued work on the PHC plantations have been held in jail for 30 days. DRC’s Constitution only allows for people to be held for 48 hours without charges.

A formal complaint filed by RIAO-RDC in 2018 to several of the European development banks stalled out.

“The grievance mechanisms have been completely ineffective,” Mousseau said.

At the same time, violence related to the plantations continues to dog the communities. Congolese soldiers fired live rounds at a demonstrating crowd in March 2019. A few months later, in July, a security guard for Feronia was accused of having killed a land rights defender and RIAO-RDC member named Joël Imbangola Lunea. The guard was acquitted of the crime. The CDC Group, a British development finance agency that was the largest shareholder in Feronia when it operated PHC, commissioned an investigation into the killing, but has yet to release its report on the matter. The group did issue a statement that no evidence surfaced “that the alleged murder had anything to do with the accused’s status at the time as an employee of Feronia.”

For the proponents of returning PHC land to the communities, hopes that the transfer of ownership would mark a change in the modus operandi of the plantations’ operators were dashed in mid-February. A delegation from Straight KKM came to the Lokutu plantation, which, at 63,560 hectares (157,060 acres), is the largest of the three PHC plantations. A group of reportedly peaceful protesters met the company representatives and were soon arrested by security forces, NGOs working in the area said. Once in custody, the protesters were beaten in some instances, NGO staff said.

Still, a small movement to start small-scale palm oil production on a 420-hectare (1,038-acre) patch of land abandoned on the Lokutu plantation in 2020 offers the communities a glimmer of hope. Community members say they can now make more money than they could as laborers for PHC, where wages ranged from $1.50 to $2.80 per day in 2018, according to calculations to  by the NGO Human Rights Watch.

Mousseau questioned the investment of financing by development finance institutions in private equity groups rather than in the communities that, he said, clearly need an economic boost.

“If this amount, $150 million by the development banks, had been spent to help communities create a business or create their own processing or plantations, imagine [that],” Mousseau said. “It’s ridiculous when you imagine all this money could have been spent for the people, and instead it goes into, I don’t know, consultants and salaries of CEOs.

“You can just imagine that so much is not going into the pockets of the local communities.”