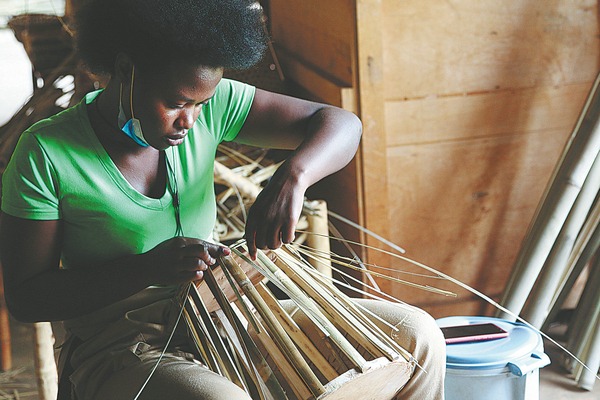 [ACCI-CAVIE] At least three million bamboos are being planted in the districts of Bugesera, Ngoma, and Rwamagana to supply a factory to produce pulp, papers, and packaging materials among others, according to consistent African Centre for Competitive Intelligence sources.

Different bamboo species are being planted in the country so as to avail raw materials for different various bamboo-based products.

Already East Africa Bamboo Forest Industry Ltd, a Chinese firm that is planting the three million bamboo seedlings has completed one bamboo processing factory in Rusororo sector, Gasabo District in which $5 million has been invested.

It will produce marine boards, plyboards, and furniture.

It is expected to produce 10,000 pieces of marine board per day. Other phases are expected to locally manufacture various bamboo-based products, ranging from toilet paper and other sanitary products, toothbrushes, shoe brushes, for sale in local and export markets according to Ting Kuo Yu, the Chairman of East Africa Bamboo Forestry Industry Limited.

Over 120 tonnes of paper pulp could also be produced per day.

He said that at least Rwf300 billion could be invested in adding value to bamboo in the five-year project.

Yu said the three million bamboo seedlings will be planted on water bodies’ buffer zones in one and half years although the initial planning was to do it within three years.

The bamboo planting which was launched last week on Lake Cyohoha in Bugesera district will cost Rwf5 billion.

So far only 179 hectares can supply quality raw materials for the bamboo processing plant and aren’t enough considering the demand by the factories to be set up, he said.

Spridio Nshimiyimana, Ag.The Director-General of Rwanda Forest Authority said that bamboo trees are also part of forests whose management has to be privatized.

Government seeks to privatize 80 per cent of its forests by 2024.

“The investor will help us to harvest and add value to the current mature yellow bamboo trees that are planted on 179 hectares,” he said.

Rwanda seeks to increase bamboo cover from 530 hectares to 5,000 hectares to supply the bamboo processing factory.

He said 2, 129 hectares have been earmarked in the districts of Bugesera, Rwamagana, Ngoma, Rulindo, Nyarugenge, and Kicukiro to help supply the raw materials for bamboo processing.

Currently, he said, existing Vulgaris bamboo species in Rwanda are not of good quality to be used in manufacturing.

Rwanda, he said, has the potential to grow 30,000 hectares of bamboos.

“Some bamboos are produced into clothes. We expect that the import bill on bamboo-based products will decrease when many factories are set up to add value to bamboo in Rwanda,” Nshimiyimana said.

Richard Mutabazi, the Mayor of Bugesera District said the project to plant bamboos will help to protect the environment and biodiversity accommodated by nine lakes in the district.

“The bamboo trees will contribute to the reduction of floods that used to ravage plantations and fishes in Lake Cyohoha and others,” he said.

Over 30,000 citizens are expecting to get jobs from the project from seedlings preparations, planting, and manufacturing.

Jean de Dieu Ngezahayo a citizen from Musenyi sector in Bugesera District said that he is paid between Rwf2,000 and Rwf2,500 per day adding that fish production could also increase when Lake Cyohoha is protected from erosion.

Francois Sinamenye, a father of two children added, “Drought drastically affected us in the concluded agricultural season A since many crops withered. The initiative to plant bamboos has helped us to fight famine in our families after getting employment.”

Séraphine Mukanyangezi, other citizens from Nyagihunika cell, Rugarama village said that the employment is helping to get money for buying pesticides for crops in the area.

“We hope the trees could also attract rainfall in Bugesera and ensure that crops no longer wither due to drought,” she said.