Scope to expand and diversify trade with Ethiopia: MoS MEA 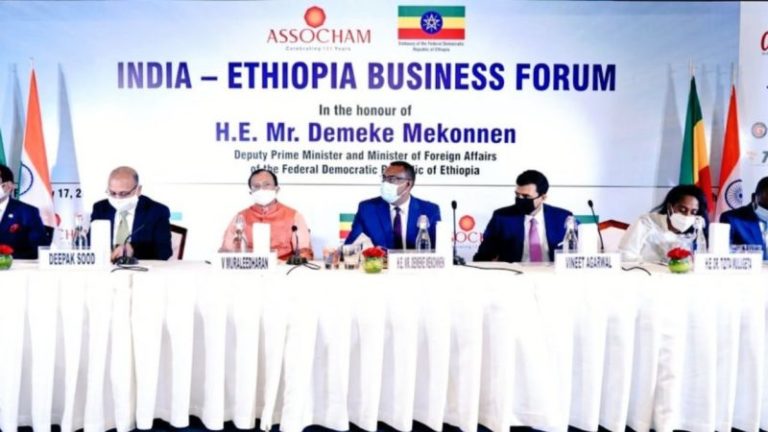 [CAVIE-ACCI] Noting that India is also one of the largest trading partners of Ethiopia, Minister of State for External Affairs V Muraleedharan on Wednesday said Indian investors have invested strongly in the African nation, but there is a scope to expand and diversify bilateral trade.

Addressing a India-Ethiopia Business Forum meet in the presence of visiting Ethiopian Foreign Minister Demeke Mekonnen, he said Ethiopia’s economy has posted double digit growth rates over 15 years and it also has a highly-educated and skilled populace.

‘These attributes are due to the sound economic policies of its leadership. It is natural then that Indian investors have invested strongly in Ethiopia to the mutual benefit of our two nations,’ Muraleedharan said.

‘I learned with happiness that today there are over 607 Indian companies in Ethiopia with a licensed investment of over USD 5 billion. These Indian companies give employment to about 75,000 Ethiopian nationals. EXIM Bank of India has its regional office in Addis Ababa, attesting further to our recognition of Ethiopia’s economic weight in the region,’ he said.

Despite the COVID-19 pandemic, Indian businessmen have continued to explore investment opportunities in Ethiopia, the minister noted.

‘During the last one year, we have had 35 new Indian investments in Ethiopia. Let me take this opportunity to express appreciation for the Ethiopian government’s effort in creating a congenial environment for foreign investments and in particular for facilitating Indian companies to invest in Ethiopia and carry on their business,’ Muraleedharan said.

Noting that India is also one of the largest trading partners of Ethiopia, he said there is still a scope to expand and diversify trade between the two countries.

‘I am certain that our two business communities are working towards this objective,’ he said.

Another important aspect of the bilateral relations is the development partnership which covers sectors such as rural electrification and the sugar industry, the minister said.

The development partnership consists of a total of six Lines of Credit amounting to USD 705 million extended to Ethiopia, he said.

Sharing his perspective, Ethiopian deputy prime minister and foreign minister, Mekonnen, said that while bilateral trade ties between India and Ethiopia have reached USD 1.23 billion and over the years and Indian exportable goods to Ethiopia has shown exponential growth, Ethiopia’s export to India remains as low as before.

Inviting Indian businesses, Mekonnen also talked about a 10-year economic development plan unveiled by his government with a vision of ‘Ethiopia: An African Beacon of Prosperity.’ ‘We have also defined new frontiers of growth, including digital economy, tourism, science and technology, human resource development and increase in productivity in agriculture and industry,’ he said.

Mekonnen, who is to arrive late on Tuesday evening, will hold talks with External Affairs Minister S Jaishankar on Friday and head back the same day.