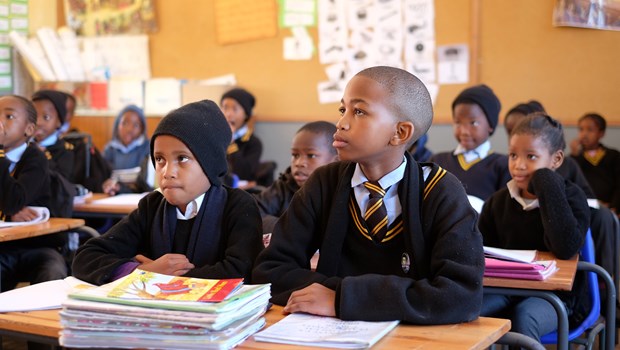 [CAVIE/ACCI] Imagine starting school and not being able to understand your teacher. That’s a reality for many African first-graders who speak their mother tongues at home and are taught in English, French or Portuguese at school.

Africa south of the Sahara is home to around 2,000 different languages. They’re spoken at home, on the street and perhaps on the local radio and TV stations, but very few have made it into the classroom.

The languages taught and spoken at school are relics of the colonial era and many children, especially those in rural settings, enter the all-English, French or Portuguese language schools with little prior knowledge.

It’s counterproductive, say educational experts. “If you want to find a measure to prevent children from learning, you have already found that by teaching in a language that they don’t hear around them,” says Birgit Brock-Utne, a Norwegian education expert. She is currently based at Witwatersrand University in South Africa as a visiting professor. “Our research shows very clearly that it is better to start with the mother tongue or another language the children are familiar with.”

In some African countries, this change is already happening in the classroom. Primary schools integrate local languages into the lessons and some are even teaching exclusively in the local language.

According to UNESCO’s  “Global Education Monitoring Report 2016,” teaching in the mother tongue is vital, especially at a primary school level.  It recommends that children should be taught in their mother tongue for at least six years, to avoid knowledge gaps and increase the speed at which children learn and understand the taught material.

Children are more active, think more critically and create an entirely different classroom atmosphere when taught in their mother tongue, says Brock-Utne. She experienced this during her school visits in Tanzania and South Africa.

Haussa and Yoruba instead of English

So how do the different countries deal with language diversity at school? That’s what DW wanted to find out.  In Nigeria, there are over 500 local languages, but teaching mainly takes place in English. A pilot project is currently introducing the most widely-spoken languages Haussa, Yoruba and Igbo into the curriculum in primary schools.

In Senegal French is the module of instruction – a language in which only one-third of the population speaks fluently. Schools have now started introducing bilingual classes in French one other local language. In Mozambique, an approach to open the schools to 23 different languages is planned.

Although it was never colonized, Ethiopia also has problems integrating local languages. The use of only one language, Amharic, has led to quite a bit of resistance, explains Axel Fleisch, a professor of African Studies at the University of Frankfurt. “In such a case, an international language like English is seen as a more neutral option,” he adds.

“It would, of course, be better for the children to learn in a language they already know. But the question is, which language is that?” asks Rose Marie Beck, a professor of African Studies at the University of Leipzig. Many of the children grow up in a multilingual environment. Few areas in Africa have just one dominant language. Teachers, she says, must consequently be more flexible and use a mixture of languages to teach the children.

Implementing such changes, however, costs money. Organizations like USAID or the International Organization of La Francophonie have programs which support the development of teaching material and teacher training. But that’s not enough for continent-wide change.

Parents and elites not convinced

A further challenge to the new approach: not everyone supports it. Africa’s middle classes and elites support the use of European languages, says Fleisch. And these are the decision-makers.

Additionally, the European languages are still very important for higher education. Only a fraction of the students will, however, end up working in white-collar jobs, says Brock-Utne. She believes that the international languages could be taught as subjects instead of being used as the main teaching language.

“Another reason which is more difficult to tackle is that many parents, even if they don’t speak the colonial languages themselves,  think that the best way to learn a foreign language is to have it as a language of instruction,” says Brock-Utne. But that isn’t correct, she says, especially if the teachers themselves are not fluent in the language.

While English, Portuguese and French have their colonial origins, even some of the African languages have negative connotations, says Fleisch. In South Africa, for instance, students took to the streets to call for the use of English at universities and against the use of the colonial Afrikaans and local languages like Zulu. The language, many argued is too closely associated with ethnicity and the separation of the different groups during apartheid.

In many cases, the languages are very close and are dialects of the same language, explains Brock-Utne. It was often missionaries who wrote down the languages and to teach them, you would first have to agree on a common way of writing them.

The Kenyan author and Ngugi wa Thiong’o has his own vision of how languages should be taught in school. “My policy which I am advocating is simple: Start with your mother tongue. Then, know whichever is the lingua franca or the language which can enable people from different linguistic communities to speak to each other and then add English, French, and any other language,” wa Thiong’o told DW. If only English and French are taught, he says, it creates the impression that knowledge only comes from abroad.