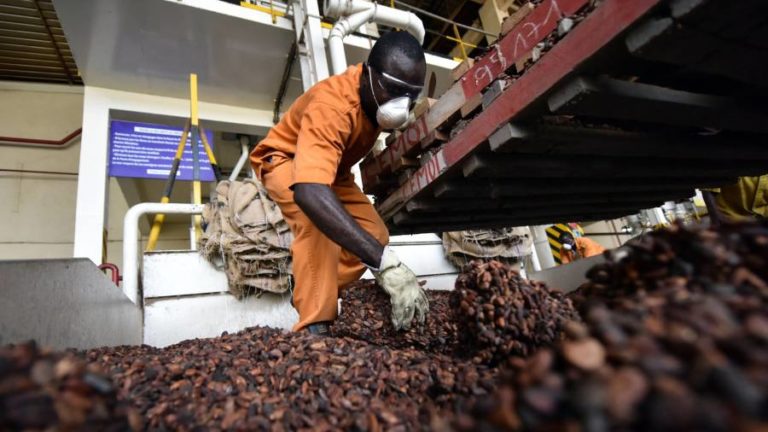 [ACCI-CAVIE] The first of its kind facility allows the country to process cocoa for the first time in a boost for local farmers and a win for Africa’s manufacturing capacity.

Sierra Leone opened its first cocoa processing factory in a bid to bring profits from the country’s crucial industry home and improve the lives of thousands of local farmers.

The new factory’s machinery, nestled in the eastern Kenema Village, juddered to life last week in a ceremony attended by president Julius Maada Bio, who said it was a “giant step” for the country and economy.

With the capacity to process up to 4,000 tonnes of cocoa beans per year – around a quarter of the country’s annual output – Sierra Leone’s cocoa industry joins the ranks of the world’s largest cocoa producers, Côte D’Ivoire and Ghana, who have been crushing, roasting and grinding cocoa beans into unsweetened cocoa liquor or cocoa mass, used to manufacture chocolate, for years. Côte D’Ivoire, which got its first industrial scale chocolate factory in 2015, today produces two million tonnes of cocoa a year, equivalent to more than 40% of the world’s market.

While the opening represents a small victory in the continent’s fight to profit from its natural resources instead of exporting raw materials to industrialised nations, the processing plant is also about helping local cocoa farmers release the potential of their land, crops and skills, Hashim says. “It’s more about the impact on farmers, and how it will change their lives,” he says. Built as part of a $2.9m project backed by $600,000 from the Sierra Leone Agribusiness Development Fund, (SLAD) and designed to help cocoa farmers extract more value from their hard labour, the impact of the project is two-fold.

Firstly, it aims to improve the crop quality and yields of some 2,800 farmers it sources its beans from by supporting farmers with better cocoa seedlings, organic crop certification, agricultural training and loans to scale their operations. Secondly the project will help farmers secure a higher price than their produce in the global cocoa marketplace, he says.

The project may help to reinvigorate the country’s floundering cocoa industry as it recovers from the long-term impact of a ten-year civil war. Though the guns fell silent in 2002, the neglect of cocoa estates during the war has left production and output below pre-war rates.

Cocoa beans are the country’s fifth biggest export, with the bulk of their cocoa ($31.8m) destined for the Netherlands, Belgium, the United States, Italy and Malaysia. The next steps will be manufacturing chocolate in the country for the first time, Hashim says. “We have plans to upgrade the factory to produce chocolate, butter, and powder within 2022, and are looking to expand our export markets to North America and the Middle East.”

The region’s heavyweight cocoa producers are also locked in an ongoing battle with big chocolate companies who they accuse of denying farmers a dignified existence by trying to avoid a newly introduced minimum price of $400 per tonne for cocoa.

The premium was introduced in July 2020 by Ghana and Côte d’Ivoire, who produce more than 60% of the world’s cocoa, in a bid to curb farmer poverty.

A report published by the VOICE network, which advocates reforming the cocoa sector to improve working conditions, says that the bulk cocoa market holds producers in a cycle of poverty, with less than 10% of farmers in Ghana on or above the living income line.

The ongoing price feud has triggered an intense and complex wrangling between chocolate giants and West African governments that is playing out “like a Netflix series, as opposed to a Hollywood film with an ending”, says Antonie Fountain, the managing director of the VOICE Network.

“But clearly in the end without higher prices, cocoa will never be sustainable, so we’re going to have to find a way out of it somehow. The fact that the Ivorians and the Ghanaians are coming together to get higher prices for the farmers are a good first step. But its needs to go further.”