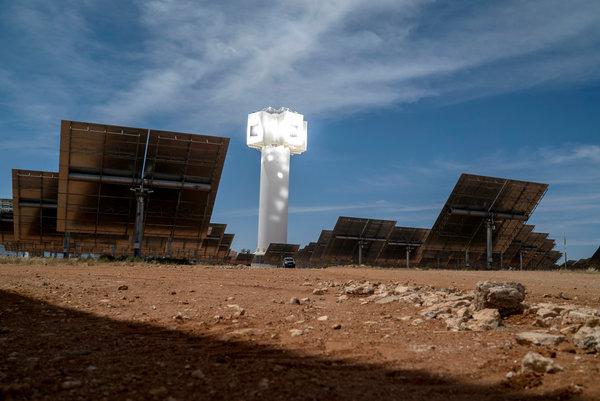 [CAVIE/ACCI] Letina Phiri waits at a bus terminus in Lusaka, the Zambian capital, as loaders carry her baggage of huge solar panels to pack on the bus. “I will sell some of the panels as soon as I get home. Where I live, not far from Kabwe town, many people in rural communities there have started electrifying their homes with solar and I want to do the same,” 51-year-old Phiri told IDN.

Even in Zimbabwe, solar energy has started to gain ground in remote areas like Seke in the country’s Mashonaland East Province.

One of the villagers in Seke, 47-year-old Melinda Chisvoto, a mother of three, has found solar to be the panacea in the midst of the lack of energy in the area.

“At night, you find my home all alight with solar lamps and it is cheap because once I buy the solar panel and the other gadgets that work with it, I don’t need to pay any extra cost,” Chisvoto told IDN.

Besides individuals embracing solar energy, governments in Southern Africa have led the way in promoting the energy sector – giving a facelift to both hydro and solar energy in a bid to end the energy crisis in the region.

In Zambia, home to many like Phiri, the government has spearheaded a number of projects aimed at boosting energy in the Southern African nation – thanks to international development agencies that are stepping in to help the region fend off energy poverty.

Added to the rising solar power stations across the region, hydro power stations are also on the increase as even the remotest of places in Southern Africa are being connected to electricity.

As a result, development experts here like Zambia’s Peter Banda say that the Southern African region is “fast rising from its past as it fights to catch up with the rest of the world in prioritising energy development.”

The developments are taking place at a time Africa is experiencing economic and population growth, and therefore demand for energy. However, two-thirds of the people in sub-Saharan Africa still lack access to electricity.

Twenty-two years ago, the government of Zambia set a goal for universal electricity access for all of its citizens by 2030, with the government declaring its commitment to develop and maintain energy infrastructure and services. In 2017, Power Africa made marked progress to support Zambia’s power sector development as it assisted the Energy Regulation Board (ERB) with development of Multi-Year Tariff Framework (MYTF) Procedures, Rules and Regulations to enable ERB to set tariffs in advance over a three-year period to allow conditional adjustments in tariff changes to be factored into the utility.

More aid aimed at boosting energy in Zambia also came from the United States Trade and Development Agency (USTDA), which provided feasibility funding for two private sector developers that aimed to advance 20 MW of geothermal generation capacity in the country.

In 2017, the African Development Bank (AfDB) approved 50 million dollar framework financing for small-scale renewable energy projects in Zambia intended to finance 100MW of renewable energy projects.Meanwhile in Mozambique, for low income earners like 47-year-old Antonio Chikanda, electricity poverty has become a thing of the past despite living in a slum.

“Here in Chimoio, we have electricity for almost every home near the power line and many people are getting electricity connected to their homes,” Chikanda told IDN.

As many Mozambicans like Chikanda brag about having access to electricity, government there last year embarked on implementing a number of renewable energy projects intended to guarantee electricity for all by 2030.

In 2017, the Mozambican public Energy Fund and Galp Energia also signed a partnership protocol for the installation of photovoltaic solar systems in five rural communities in the provinces of Maputo, Sofala, Manica and Cabo Delgado budgeted at 545,000 euro.

And according to the Mozambican Ministry of Mineral Resources and Energy, more than 3.7 million Mozambicans benefited from new solar photovoltaic systems in 2005-2014, while solar energy is now reaching 201 villages, 669 schools, 623 health centres and 77 public buildings.

Two years ago, Scatec Solar and Norfund signed a power purchase agreement securing the sale of solar power over a 25-year period to the state-owned utility Electricidade de Mozambique.Norfund is Norway’s state-owned investment fund mandated to develop sustainable enterprises in developing countries like Mozambique in particular.

The project is the first large-scale solar plant to be built in Mozambique and represents an important first step in realising the country’s ambition to increase renewable power generation in its energy mix.

In Botswana, development experts there see the country more advanced in terms of power generation in the Southern African region.

“Botswana is way ahead in terms of linking electricity to its people, whether poor or rich and even rural households enjoy electricity here,” Keketso Sotho, an independent development expert based in Gaborone, the country’s capital, told IDN.

With the country domiciled within the region of the Kalahari desert where solar energy is rife, renewable energy could be a game changer in Botswana’s plans to be a net exporter of power.

As such, the Botswana government is looking into expanding the country’s energy mix by tapping into its abundant renewable energy sources, enabling its goal of becoming a regional powerhouse and major power exporter in the next few years.

At the Base Metals Beneficiation Forum in Francistown in 2015, Botswana’s Minister of Energy, Minerals and Water Resources, Kitso Mokaila, assured mining executives that the government was leaving no stone unturned in its bid to become a net power supplier.

Currently, the national power utility, Botswana Power Corporation (BPC), produces 470MW at its coal-fired Morupule B Power Plant while the country’s national power demand at the moment stands at an average of 550MW.

As it builds up its electricity base, the Namibian government has already managed to connect nine of 14 power projects to the country’s national electricity grid through its Interim Renewable Energy Feed-in Tariff project.

And the Namibian Energy Minister has gone on record saying that his government is committed to increasing the local electricity generating capacity from 400 to 600 MW and the rate of rural electrification from 34 percent to 50 percent by 2020.

Finally, in South Africa, with the election of Cyril Ramaphosa as president in early 2018, the country signed long-delayed renewable energy contracts worth 4.7 billion dollars with independent power producers.

How solar power is changing lives in Africa

Why lithium ion batteries give hope to Africa