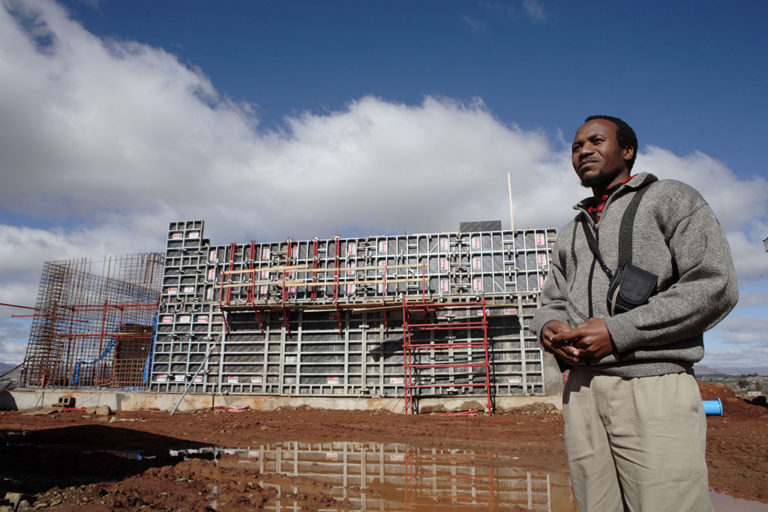 [CAVIE/ACCI] Africa is a land of vast resources, but owing to a history of colonization and exploitation, it has not been able to transform this natural abundance into wealth for its citizens. Today African nations are focusing on nation building, but a massive infrastructure gap – estimated at US$130-170 billion a year by the African Development Bank – is holding them back.

At the start of the 21st century, China, with its economic muscle fuelled by its strong industrial base, arrived in Africa with a completely different approach. It wanted to help build up the continent and it gave local governments freedom to utilize resources for themselves.

China brought along its own invaluable experience of infrastructure development. It lifted millions of its people out of poverty through networks of expressways and railways that connected all parts of the country. The upgraded national infrastructure connected rural areas with industrial areas and cities. Railways contributed to the long-term growth of China and resulted in an enormous inflow of foreign investment, further boosting the national economy.

China is now using its experience in developing its own domestic infrastructure to revive the ancient silk trading routes under the Belt and Road Initiative (BRI). Announced in 2013, the BRI is principally an infrastructure project aimed at improving the connectivity of major industrial hubs and markets.

Now China is offering to Africa the experience it has accumulated in developing infrastructure in China and abroad. Since the construction of the railway line from Tanzania to Zambia in the 1970s, China’s aim to bring more development to Africa has made significant progress.

A cornerstone of recent Chinese projects is the railway line from Kenya’s capital city of Nairobi to the port of Mombasa. This line became operational last year and is the country’s largest infrastructure project since its independence. The railway line is expected to further connect South Sudan, Rwanda, Burundi, Ethiopia and the Democratic Republic of Congo when it begins its expansion phase.

Apart from building a ring road and a six-lane highway, Ethiopia has seen an upsurge in economic activity after China funded the Addis Ababa-Djibouti Railway. This line connected the land-locked country with the coast of the Red Sea and collectively, these projects have contributed towards making Ethiopia the fastest growing economy in Africa.

Upcoming Chinese projects in Africa also include a mega port and a pipeline in Tanzania, a port in Kenya, and a six-lane highway in Uganda. China’s Foreign Minister Wang Yi said last year that China had assisted in building over 6,200 km railways and more than 5,200 km roads in Africa.

Several new infrastructure cooperation initiatives were launched during the Forum on China Africa Cooperation (FOCAC) Summit held last week. Some of the more high profile ones announced included a 2,407-kilometer railway line from Sudan’s port to Chad’s capital city, N’Djamena, as well as a US$3.5 billion contract to build Egypt’s new administrative capital. Chinese companies will also be investing an additional US$10 billion in Africa over the next three years.

Chinese assistance towards developing Africa’s infrastructure has been markedly different from aid coming from the West. Financial reliefs from Western countries have come in the form of aids, grants, and equipment, but as Africa’s largest trading partner, China adopts a more practical and development-oriented approach. It establishes export credits and loans for infrastructure with very few strings attached and also guarantees non-interference in recipient countries’ internal affairs.

Western business entities can also launch tripartite projects with Chinese companies in Africa to understand the Chinese investment model. British Prime Minister Theresa May recently expressed a desire to increase trade with Africa. As such, U.K. companies can collaborate with Chinese companies just as their American counterparts have done.

General Electric (GE) is now working with Power China in Nigeria to jointly build power plants and grids. The two companies even launched a roadshow last year across Nigeria, Ethiopia, and Kenya to highlight the challenges in building Nigeria’s grid system. U.S. companies like Caterpillar and Honeywell have also partnered with Chinese enterprises to carry out development work in Africa. These projects have not only contributed to achieving the BRI’s goals, but also grown their individual businesses.

Since the first FOCAC in 2000, cooperation between China and Africa has come a long way. This year’s FOCAC culminated in formal agreements to help Africa further build on its vast potential. As Africa sets out on a journey to bridge its infrastructure gap, the two civilizations are looking forward to a common future of industrialization and prosperity.