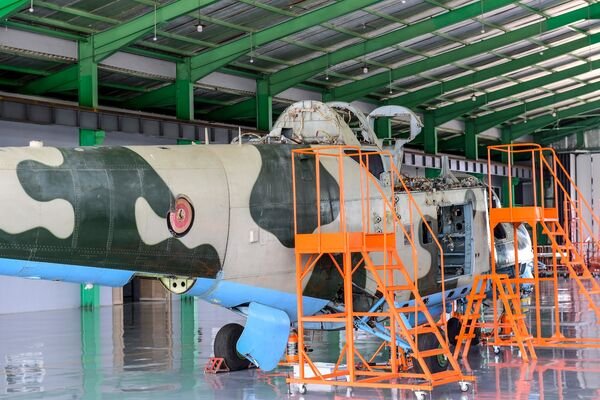 [ACCI-CAVIE] Ugandan President Yoweri Museveni presided last week over the commissioning of the Helicopter Maintenance, Repair, and Overhaul plant. The facility is located at the Nakasongola UPDF Air Force Base.

The government plans to make the facility “a hub not only for the entire East African Region, including UN Missions which use Russian helicopters, but for the entire continent.”  “A huge saving will be made on the costs currently incurred by the Ministry of Defense/UPDF on clearing, handling and freight of the helicopters to repair stations abroad which is not less than $1,200,000 one way, for each helicopter,” said Sabiiti Muzeyi, MD of Luwero Industries, a subsidiary of National Enterprise Corporation (NEC).

Valari Copcin, managing director of Russian Pro-heli international services, which is also supporting the project, said: “this facility being commissioned today can do major repairs, service, and overhaul of Mi-17 (Mi-8) and Mi-24 helicopters. This, in turn, saves the country loss of money in transportation and general turnaround time.” Backing up his comment, Lieutenant-General Charles Lutaaya, commander of the air force, said aircraft “will no longer be grounded for long periods due to lack of spares and technical expertise input as this can be now sourced from the MRO (maintenance, repair, and operations, ed) expertise.”

The newly launched plant is the first of its kind in sub-Saharan Africa. A team of 15 is already deployed at the facility to work on the overhaul of a Mi-24 under the supervision of expatriates. “In the long run, we shall do all this work by ourselves,” said Major General Muzeyi.